“I wanted to float in a pool. I wanted to fly. I want to bungee, I want to get into silks, I want to do all those things. It makes you weightless. I carried around so much weight because I was obese, that I just wanted to be weightless, I wanted that lifted off of me. So that’s where the name came in, I got up at 3am, middle of the night, and I just kept thinking weightless, weightless, weightless. That’s it. That’s it, I want to be weightless. I called up a friend. She’s good at graphic design. I said hey, I need you to create me a logo, and she was like, okay, like what do you need I said I want there to be a feather, I want you to feel like, when you look at it I want you to take a deep breath, like, yeah. And so that’s how she came up with it, and I think it’s perfect.” 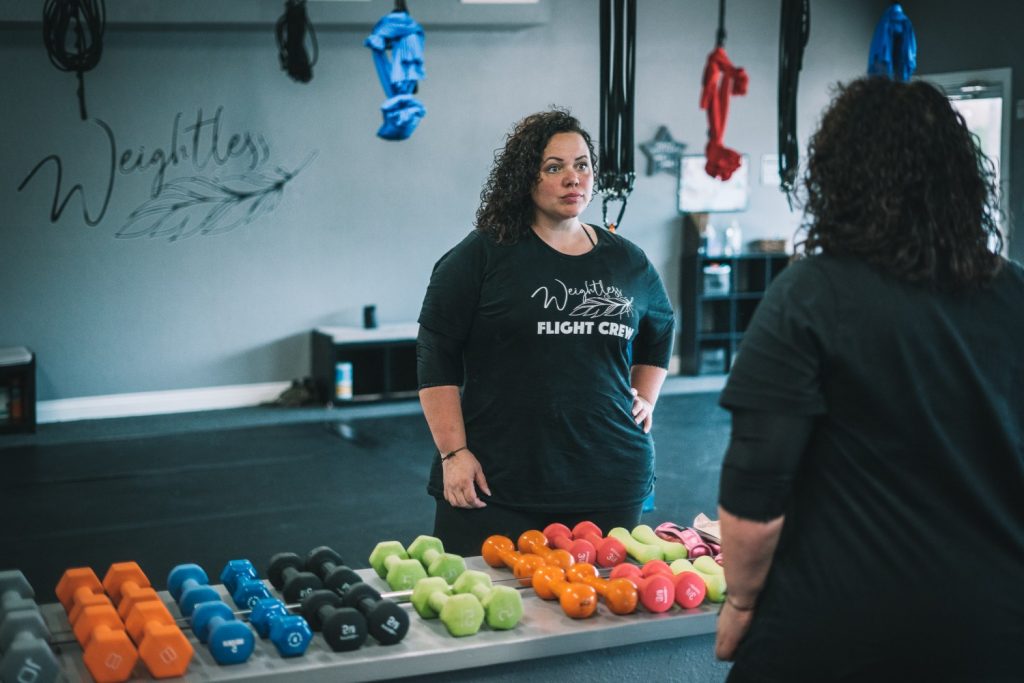 “I wanted to be weightless.”

“I was on a weight loss show and at my highest weight I was almost 400 pounds. We don’t know for sure because the scale didn’t go that high, it went up to 360, so I was 360 for sure, but probably higher. And I was scared to go into gyms, and I was intimidated, and there were mean girls that judged and looked and gawked. I didn’t know how to use the equipment, and I didn’t have any instructions, and I was at the end of my rope, like I didn’t know who can help me. So I auditioned for Extreme Weight Loss on ABC, and they helped me lose half my body weight on the show, and I decided I wanted to be a coach, I wanted to help people like they helped me, and so I went and got my coaching certifications and started coaching and I was actually coaching downtown, quite a bit. I was coaching at Gypsy Kit Fit when it was in Oil and Gas. I would do Tabata Tuesdays with Tiffany out there. It was intense, it was heavy weight, push ups, like hardcore work, because that’s what kind of coach I was. I’m an intense person, and I coach intensely. So, the cancer journey was tough, it changed the game. I was coaching at Urban Air for trampoline fitness, which is really good for the joints and stuff. And so I picked up all these little nuggets along the way to create Weightless.

After six months of chemo, double mastectomy hormone treatment, having my ovaries removed, forced menopause, all of that, my body couldn’t do those hardcore workouts anymore. I just couldn’t. My mission is to encourage and inspire people. And I have to live my mission, I have to find another way. I have to create this. So I did research on the best low impact fitness, because I could barely walk without pain, much less do intense workouts, there’s just no way. There’s a couple things there: bicycling and swimming. I just had both my breasts amputated. I did not want to get into a swimsuit, like that’s weird, right, so I didn’t want to do that. So I’m going to have to think out of the box. Let’s see what else is out there, and I found bungee. It came over here from Taiwan. There’s very few places in the US that have it, and very, very few places in Texas that have it. Of course we’re the only place in Wichita Falls that has it, so it takes weight off of  those joints, so I coach three to seven hours a day with way less pain. I realized that not only is it good for cancer survivors but it’s good with people with rheumatoid arthritis, it’s good for people that have knee injuries, ankle injuries, like it just takes a lot of weight off of the body.”

Head over to Downtown Development’s Facebook Page to read more of Tiffany’s story.