“That was my whole thing, I did a lot of video production. When I moved back none of them were digital. I know how to edit on Beta. I was working for Design Works because they didn’t have a camera. I was the only person in town with a digital camera. Three chip digital, like are you kidding me. Originally on my window, even if you look you can kind of see right there, see it says, graphic design, screen printing, video production because when I first opened up I was doing all of it. Then obviously the screen printing kinda started snowballing and took over from there and less video production. Which is fine, and of course now I’m like if it’s video production,  it’s just stuff I do for me. I’m like no I don’t, I’m not gonna do any. I like flying drones. You’ll see me down here, flying but I like the little ones. The police don’t trip. They’ve been real cool about it because I’m not technically probably supposed to.” 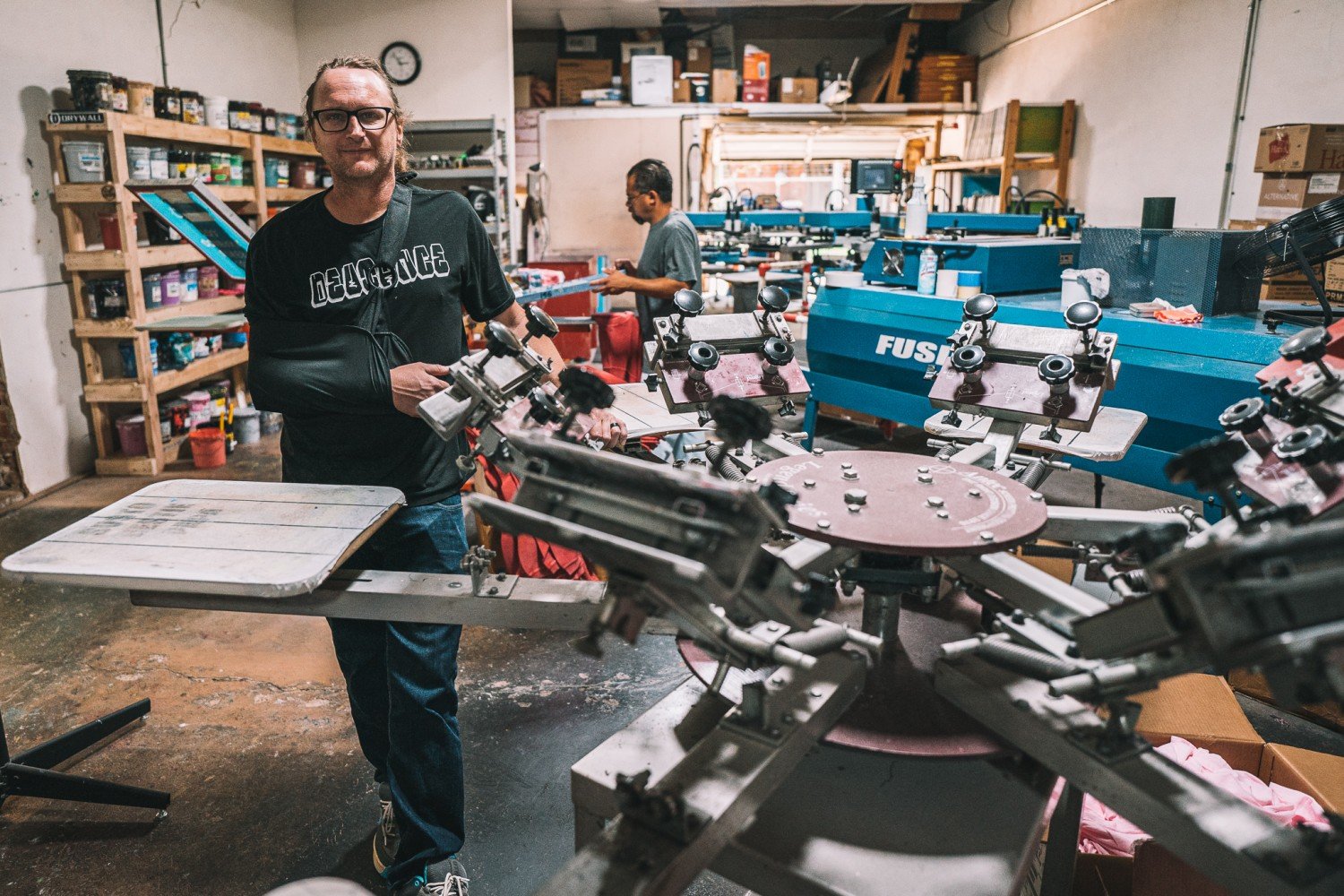 “Of course with my filming arm I’m not doing anything too heavy, I’m getting too old.”

“We don’t have ghosts but we definitely have a demon in the building that loves to take stuff. You just set something down, you’re like, ‘Dude, where did that one thing go?’, and you’ll never find it again. And you’re like, What the hell. I mean seriously, you’re gonna have to ask Joe or anybody else. Okay, I just sat it there, where did it go? My garage was the first Mexican restaurant in town. And the funny thing is, it had been an apartment or some kind of hotel, you can tell there was a second floor. There used to be individual rooms. I don’t know if it was ever a brothel. But ya know, DW’s was here back in the day with a peep show. Pretty sure it became a church. After the peep show.  Guys brought me photocopies of the phone books they found from like the 30’s and whatnot that told you what all the things were. Yeah, it was an auto battery store, like in the 30’s. I know it was a saddle shop, some guy that’s really big or was big in the horse saddle making world. He was here for a long time. I don’t remember the name. Now I couldn’t tell you how long it sat vacant before I got it. But it sat for a while. I just wish they would have done things to change the buildings and maintain them. It was an auto body paint store before I got into it, and it was a mess. I mean it was a mess. “

Head over to Downtown Development’s Facebook Page to read more of Jeff’s story.