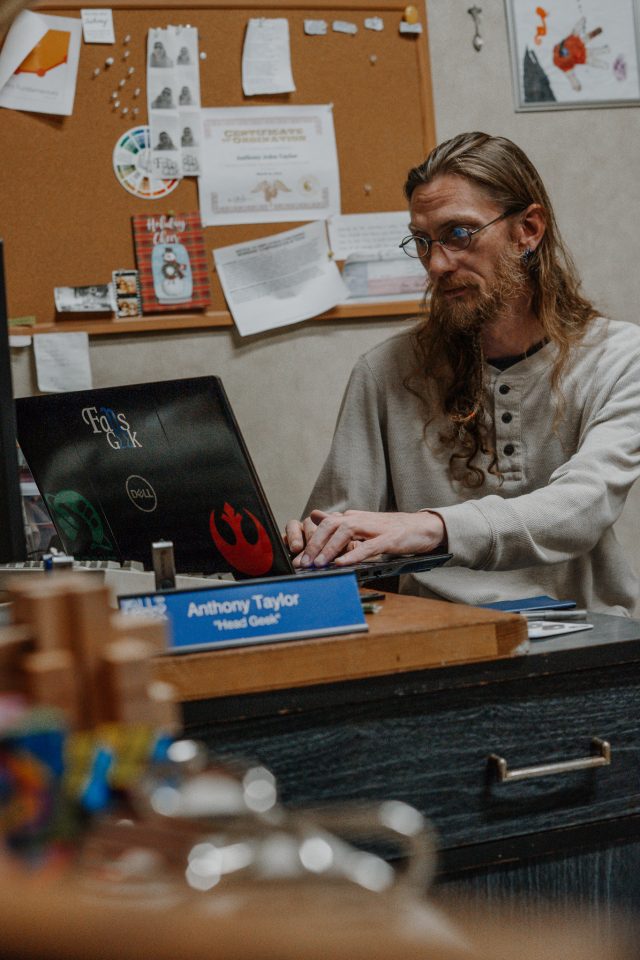 “I print stuff that I think I might like and I make stuff that I think I might like, but that also might sell.  I guess I’m biased and that leads into a style, so to speak, it leads into certain areas and stuff but, I try to stay open minded when people ask me to print things, open ended, and I’m not trying not to be pigeonholed. So I do more than printing. I’ve also got a laser that I’ve just gotten a hold of a couple of years ago. So I’ve been playing around with laser engraving and laser cutting and etching. Got a hold of a Cricket, so I can do vinyl cutting and I just got a button machine so I’m making buttons now. Originally, I guess what has supported all of that has been that I make websites. So that’s kind of the bread and butter and still pulling in the biggest paychecks.  I developed a skill and there was a need for that skill. I found I could get paid for that skill. And so life was good. In one way or another, I’ve been doing this for over 20 years. I guess a full time business it’s been 10 years now.”

“My wife and I  had to come up with a rule. We’re now only allowed to buy two pieces of art from any particular local artist. But we’re not sure if that rule applies to each other or each artist. We’ve got a few artists that we bought more than two but we definitely try to support the arts. I’d rather have a local artist hanging on my wall than some stock photography, and Wichita Falls certainly has a lot of talent where you can get whatever you want done, in whatever style you want, you can find somebody out there that will be willing to commission it for you.”

“I also play guitar locally. A little acoustic duo with my friend Herman Harden and you know, Anthony, so we call ourselves HermAnthony right now. We’ve been trying to get out there and at least do the open mics and open jams. We’ve gotten a couple of little gigs here and there too. I just bought myself a new guitar and a new microphone. So now it sounds all good.”